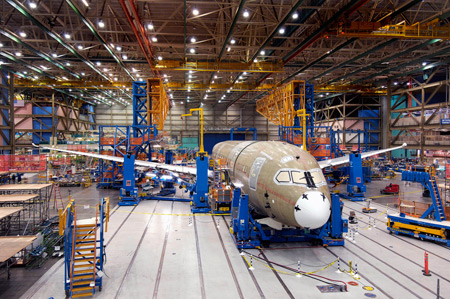 Next they receive engineering input from which they develop the tools, followed by the tool design process. Once approved the designs go to their in-house fabricating department where the tools are machined, assembled, painted and checked for quality using Verisurf X software – easy, right? Not so fast. Let’s back up and take a closer look at Engineering Input and Tool Design. In today’s high-tech world, you would think engineering data used to design and build assembly tools would be readily available, but it’s not. Either the customer does not provide it, the data has been lost or corrupted, or in the case of a rebuild, the part being replaced is no longer the same spec as when it was new. “At AIT about 90% of our projects are new builds, the other 10% are rebuilds. Sometimes we get CAD data but often we get drawings or just the part being manufactured or assembled. In every case we need to apply creativity and critical problem solving to arrive at the final solution,” said Kempen. “For these challenges we like Verisurf software – it’s easy to swim around the software. Verisurf is so dynamic we can take multiple routes to the end result.”

AIT needed to design and build a bond tool for installation of the skin on rotor blade rebuilds. The challenge was after use, the rotor blade envelope changed, compared to when it was originally built. AIT used Verisurf Reverse to reverse engineer the envelop and provide data so they could design and build an accurate assembly tool. Once designed they again relied on Verisurf software to check accuracy during the build process, and for final QC before shipping. “Virtually every tool or jig that leaves this place has a Verisurf inspection report attached to it,” said Kempen.

“Using Verisurf software we are able to save days, even weeks of machining time on large-scale bond tools,” said Kempen. Fuselage and wing skins are large complex surfaces with extreme tolerances. Typically, creating a face sheet that starts out at 1-inch thickness and is taken down to .5-inch will be reduced by less than “.100 with each pass. The machine starts with the high points and works down. In doing this, AIT use to “cut air” for days until the machine finally got down to the uniform layers. Now they use Verisurf to 3D laser scan the as built tool surface and create a machining model that allows them to cut material 100% of the time. This literally saves days and sometimes weeks of cutting, 24/7.

AIT uses multiple brands and types of metrology hardware devices, but has standardized on Verisurf software partly because it drives virtually every device on the market. “We use almost every function Verisurf has to offer. The software is intuitive and very easy to use,” said Kempen. “We have also realized training efficiencies by standardizing on the common Verisurf platform.”